Will New York Make It Illegal to Walk & Use Cell Phone at The Same Time? 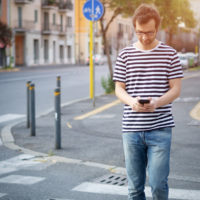 New York state lawmakers are considering passing legislation that would make it a crime to text and walk at the same time in New York. Specifically, the bill would make it illegal for people to cross the street while looking at (“viewing”) their “portable electronic devices”; even though there is no real evidence indicating that this specific activity causes accidents–simply a study produced by the National Safety Council indicating that teenagers are more likely to be hit by a car due to distraction while walking across the street.

Depending upon the number of offenses involved, the fines would range between $25 to $250, although emergency messages—such as communicating with an ambulance— as well as all police officers and firefighters–would be exempt. Similar bills have already passed in California, Connecticut, and Hawaii. As a result, a reported more than 10,000 citations were issued in Honolulu in 2016 alone.

Is New York Going Too Far with This & Similar Bills?

There are some questions remaining as to how officials plan on enforcing this law if it does pass and whether it would be enforced by police only, or others as well. In addition, some see this as extreme government overreach and an attempt to shift blame onto pedestrians, and question whether laws like these are actually effective. Some research actually shows that texting while walking isn’t necessarily the hazard it’s been made out to be, and that urban planning designs that prioritize cars and do not make it safe enough for pedestrians are the real problem when it comes to pedestrians being hit by cars.

New York has also already taken what many would call an “aggressive” stance on texting while driving; suspending driver’s licenses for one year if anyone under the age of 21 is caught texting while driving. Meanwhile, a bill that requires cyclist and pedestrian safety training for anyone seeking to get a driver’s license has already passed the state Senate, and other legislators are reportedly working on legislation that would lower the threshold used in determining DWIs from .08 to .05 percent blood alcohol level (BAC).

Similar legislation has previously been introduced in New York and failed to pass. In addition, in 2016, New Jersey lawmakers proposed a bill that would earn you prison time for walking while texting. The bill not only banned texted while walking, but would have required pedestrians to use hands-free attachments at all times on their devices. Similar bills have also failed in Arkansas, Illinois, and Nevada.

If you have been accused of a traffic-related crime, contact New York criminal defense attorney Phillip J. Murphy, Attorney at Law, for help on how to ensure that you are protected throughout the process and do not suffer extreme consequences as a result.