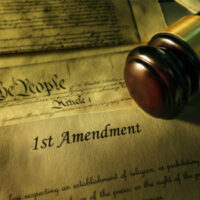 The US Supreme Court is currently considering a petition to review a case that is of vital importance to preserving our First Amendment rights: The case – McKesson v. Doe – involves a protest organizer who is being sued by a police officer who was allegedly assaulted at the protest; not by the organizer, but by someone else, and who is now trying to hold the organizer liable. The US Supreme Court already spoke to this issue in a decision from 1982, deciding that those who organize protests cannot be held liable for random violence committed by others unless they incited the specific violence that caused the injury. The Court has also recognized that fear of a private lawsuit can silence people and interfere with their civil rights just as effectively as fear of criminal prosecution.

While the district court quickly dismissed the case, citing this previous Supreme Court decision, the officer then appealed, which placed the case in the hands of the Fifth Circuit. After sitting on the case for two years and refusing to hear oral arguments, a panel of three judges reversed the district court’s opinion and held that the organizer could be held liable for the officer’s damages under the justification that he “ignored the foreseeable risk of violence that his actions created,” directly contradicting long-established US Supreme Court precedent.

What Is At Stake: Freedom Of Assembly & Speech

The case then went through a strange history on the Fifth Circuit, with one of the judges announcing that he was dissenting from his earlier decision and agreed that the case should be dismissed, to a newly-appointed judge deciding that the previous Supreme Court precedent did not apply to the current case. Regardless, there is no question that First Amendment rights of assembly and speech are under assault in ways that they have not been in 50 years. If the Supreme Court does not take the case and reverse the Fifth Circuit’s decision, protesters will be silenced and live in fear of exercising their rights.

Could The Supreme Court Reverse Again?

There is also now an additional concern as well; That even if the Supreme Court does hear the case, the current court could decide to reverse the previous decision that protects protest organizers from liability, as it recently reversed a Supreme Court opinion from 1972.  Specifically, in April, the Court reversed a previous decision in deciding that every criminal defendant facing serious criminal charges is guaranteed the right to a unanimous verdict and cannot be convicted with a split jury. While a victory for criminal defendants, especially in states like Oregon, where you could still be convicted of a serious crime such as murder with a 10-2 jury, the issue of stare decisis still concerns a number of criminal justice advocates, who are now worried that the current court could find that other earlier rulings were also mistakes and, in doing so, could remove a number of civil rights protections for criminal defendants, such as those that relate to search and seizure, Miranda rights, stop and frisk, warrants, probable cause, and activities protected under the First Amendment.

If You Are Facing Criminal Charges or Have Questions or Concerns About Your Civil Rights, Contact Our New York & New Jersey Attorneys

If you have any questions or concerns about criminal charges or civil rights issues, contact New York City criminal defense attorney Phillip J. Murphy today for a free consultation to find out how we can use our more than 30 years of experience to help ensure that your rights are protected.