Can You Get Pulled Over For Driving With High Beams In New Jersey? 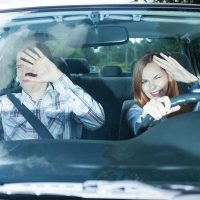 For many drivers, one of the most frustrating things is being blinded by high beams. Although high beams are intended to keep motorists safe, they can also lead to serious safety concerns if used improperly. As many motorists are no doubt aware, it is considered common courtesy to turn off your high beams when approaching another vehicle. But what happens if you fail to do this? Could you be charged with a crime? And if so, how do you defend yourself?

If you’ve been charged with any traffic offense in New Jersey, it always makes sense to dispute it to your best ability. This is true whether you have been charged with a serious offense or a relatively innocuous infraction. The best way to fight a ticket is to get in touch with a qualified, experienced criminal defense attorney in New Jersey as soon as possible. With the help of one of these legal professionals, you can push back against excessive tickets, save yourself a considerable amount of money, and potentially prevent a license suspension.

What are the Laws Regarding High Beams in New Jersey?

According to N.J.S.A 39:3-60, “improper use of high and low headlight beams” is a traffic offense that comes with a fine of $47. According to this law, you are allowed to use high beams in New Jersey during dark conditions – but only if you carefully dim your high beams when approaching another vehicle. Modern vehicles often feature automatic dimmers that do this for you, meaning you don’t even have to worry about manually dimming your high beams every time you pass another vehicle.

Can Police Pull You Over for Improper Use of High Beams?

Dedicated New Jersey criminal lawyer Phillip J. Murphy is prepared to help you today. Over the years, we have helped numerous defendants in the Garden State, and we know that even the smallest traffic offenses deserve attention. There’s simply no sense in rolling over and accepting these tickets – especially when it is relatively easy to fight them in court. Book your consultation today, and you can get started with an effective defense strategy right away.