Can You Really Go To Prison For Understating Your Income In New Jersey? 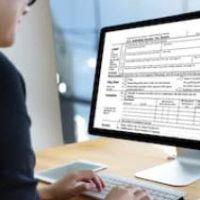 Filing a false tax return may be much more serious than you realize. Almost all companies and entrepreneurs attempt to dodge as many taxes as possible while claiming as many expenses as they think they can get away with. But there is a major difference between attempting to exploit legal tax loopholes and outright defrauding the US government. It’s often a fine line, but you should know that prison time is a clear possibility if you understate your income or commit any other act of blatant tax fraud.

An Example of Filing a False Tax Return in New Jersey

On December 9th, it was reported that a New Jersey businessman was facing three years in prison for underreporting his income. This individual ran two companies that sold colorblind glasses, electronics, and cosmetics. These companies were actually quite successful, and in 2018 he raked in more than $650,000 in taxable income. However, he supplied his accountants with false financial records that showed a much lower income. These false records were provided over the course of two years, causing the accountants to prepare corporate tax returns that underreported the true income of his companies.

As a result, he was able to pay much lower taxes on each of these years. In total, the IRS reports that they lost taxes worth almost $220,000. You have to ask yourself whether it was worth taking this risk in order to avoid just $220,000 in taxes. Although this might seem like a lot of money to some people, the company was generating over half a million in taxable income each year. He would have made much more money in the long run if he had simply paid his taxes and continued to earn income for the foreseeable future.

Instead, the businessman was forced to plead guilty to filing a false personal tax return. The penalty for this offense is a maximum of three years in prison. During this time, the businessman will be unable to continue earning income with his company – leading to further financial losses. Finally, the individual faces additional financial penalties in the form of restitution. But will he really face three years in prison? Seeing as he has decided to plead guilty, it is likely that he will receive a reduced sentence – especially if this is his first major criminal offense. On the other hand, the IRS likes to make an example of people to dissuade others from tax fraud.

Where Can I Find a Criminal Defense Attorney in New Jersey?

If you’ve been searching for a New Jersey criminal defense attorney who can help you with your tax issues, look no further than Phillip J. Murphy, Attorney at Law. Over the years, we have helped numerous defendants in the Garden State, and we know how daunting it can be to face prison time for something as innocuous as tax issues. The good news is that many tax-related legal issues can be mitigated with the help of a qualified defense attorney. Book your consultation as soon as possible to get started with an effective defense strategy.