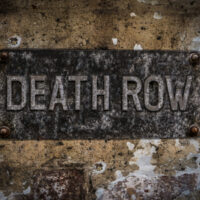 In July, the federal government resumed federal death penalty executions after nearly two decades, and executed two prisoners – Daniel Lee Lewis and Wesley Purkey – after seeking emergency orders from the US Supreme Court under very controversial circumstances, including pending appeals, opposition from the victims’ family, judge, and prosecutor involved, and/or with competency tests pending. They also proceeded even after one federal court concluded that the most current scientific evidence indicates that the government’s choice of lethal injection procedures most likely violates the Eighth Amendment’s prohibition on cruel and unusual punishment because evidence shows that prisoners are at risk of experiencing an excruciating death akin to the experience of drowning, and had halted the executions as a result. The government maintained that these prisoners were convicted of violent crimes, including killing children, and that Congress has expressly authorized the death penalty, justifying their executions.

In the case of Daniel Lee, the Department also had to overcome a remaining federal court order blocking the execution that was still in place. As a result, it took four hours to file an emergency motion to lift the court order, all while Lee was left strapped to a gurney with IV lines in his arms the entire time. He was then executed while motions and appeals were pending, and without notice to his counsel.

Media accounts also suggested that Lee did not die immediately, and may in fact have suffered due to the methods used. Lee’s last words were that he was innocent, that he and his co-defendant were in a different location when the crime occurred, and that DNA evidence proved his innocence, but was ignored. In Lee’s case, the victims of the crime opposed his execution, and filed a lawsuit against the Justice Department concerning the COVID-19 risks associated with conducting an execution during a pandemic and placing them at risk in having to travel to attend it. US Supreme Court Justice Breyer also explained in his dissent that Lee’s death sentence was arbitrarily imposed, as his co-defendant – deemed to be the one responsible for the homicide – received life in prison instead of a death sentence.

After filing another emergency request with the Supreme Court, the government then executed the second prisoner, Wesley Purkey, who was schizophrenic, and suffered from severe mental illness and dementia. A federal court had ordered a competency test be conducted before any execution be allowed to move forward out of concerns that he was also incompetent, which would have rendered an execution unconstitutional. Ignoring this, the government moved forward with his execution anyway, and reports indicate that Purkey did not understand why he was being executed, and in fact thought it was due to making too many complaints about prison conditions. Purkey’s priest and spiritual adviser also filed a lawsuit against the Justice Department under the Religious Freedom Restoration Act due to the threats he faced by having to be present at the execution during the pandemic while suffering from severe respiratory conditions.

In both Lee and Purkey’s cases, serious questions and concerns were raised as to legal counsel failing to adequately defend them at trial during their proceedings. In addition, serious question remain today as to whether there were due process violations committed to the end, as the parties are entitled to adequate notice before the injection is administered, and standing over someone while they are strapped to a gurney, while informing them that they are going to be killed, is arguably not adequate notice.

If You Are Charged with A Violent Crime, Contact Our Office

The death penalty remains on the books in New York, even though courts long ago declared it to be unconstitutional, and it goes unenforced as a result. Before this, New York had the second highest number of executions after Virginia up until 1972.

Yet even without the death penalty, being convicted of certain crimes come with significant penalties. If you have been accused, contact New York criminal defense attorney Phillip J. Murphy for assistance today. It is critical that you ensure that you work with experienced counsel from the outset in order to ensure that your rights are properly protected in court and you are not wrongfully convicted.