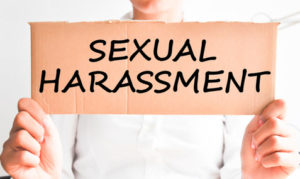 Many have been following the scandal at Fox involving Roger Ailes, previous chairman, who has been accused of sexual harassment during the hiring process. These allegations reportedly echo other claims made by Fox News employees, indicating that sexual harassment was an issue there.

While several of these individuals have now filed lawsuits against the chairman (and Fox News) in civil court for monetary damages, there are certain acts of sexual harassment that are actually considered to be crimes, as discussed below.

What Is Sexual Harassment?

Sexual harassment is typically characterized by harassment in the workplace or other professional setting, involving unwanted sexual advances or remarks. This can also include requests for sexual favors and other verbal or physical harassment if it is of a sexual nature.

Although consent is typically a defense for the crime of sexual assault, it isn’t considered to be a defense for sexual harassment because whether or not consent was involved isn’t frequently applicable, especially if there is an implicit threat of job loss. The conduct must simply be unwelcome.

The U.S. Equal Employment Opportunity Commission states that harassment is illegal when it is so frequent or severe that it creates an offensive or hostile work environment or results in an adverse employment decision.

When It Becomes a Crime

Behavior associated with sexual harassment can rise to the level of criminal behavior, such as:

If you have been suspected of a sexual act that could be considered a crime, or even just have questions about what constitutes sexual harassment or sexual crimes, it is important that you consult legal assistance right away. Contact our office for a free consultation; criminal defense attorney Phillip J. Murphy has been protecting victims accused of crimes since 1989, serving clients throughout New York and New Jersey.