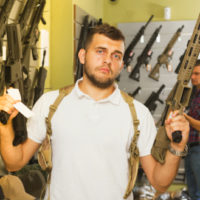 One New Jersey Township–Piscataway–is considering passing an ordinance that would make it illegal to sell ammunition or firearms within 1,000 feet of “sensitive” locations, including bars, college campuses, daycare centers, medical facilities, parks, places of worship, schools, and similar locations. Local leaders have noted that it is part of an effort to take things into their own hands in the absence of stringent federal and state leadership.

Passing such an ordinance might not be difficult, given that there currently are no businesses selling these products within this particular township. The council already unanimously approved it and it is expected that the ordinance will be adopted in June of this year.

Although similar ordinances in other areas of the country have already been upheld in federal court as not violating the Second Amendment, gun rights activists have since filed a writ of certiorari seeking review from the U.S. Supreme Court. Six bills have also been introduced in the New Jersey Senate that are designed to strengthen the state’s existing gun laws.

It is true that New Jersey’s existing gun laws are among the most restrictive in the country. They include the following requirements and prohibitions:

If you have been accused of a weapons charge in New Jersey, you should speak with an experienced criminal defense attorney right away. Contact the office of Phillip J. Murphy today for a free consultation; we serve clients in and around Bergen County.