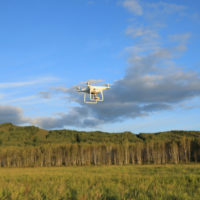 When our founding fathers wrote the United States Constitution, subsequently amended by the states, it’s unlikely that they envisioned the technological advances we’ve seen over the last few hundred years. The Supreme Court has battled with interpretations of privacy in light of sophisticated new tools like heat seeking lamps and data storage. Now, we are beginning to see a brand new level of accessibility in the way of police use of drones for investigations and the collection of evidence.

Rockland County Sheriff, Louis Falco, has recently indicated that his own police department will likely be purchasing a few drones to aid them in their work. This decision, he noted, will help them put together more cohesive evidence for juries rather than providing “disjointed” shots from various perspectives of an accident scene. The other example the Sheriff gave pointed to the use of drones in SWAT team operations. Although no one can contest the benefit of more effective and efficient policing, with the increased use of drones, particularly for police work, many people are expressing privacy concerns.

Current Laws Affecting Use Of Drones For Police Searches

Commercially, there are several restrictions placed on drone use both by the Federal Aviation Administration (FAA) and local municipalities. For example, drones must be registered and you cannot fly them above a certain height or too close to airports. Police use of drones, however, would not be considered commercial but governmental instead. Oftentimes, governmental police authority provides for broad legal exemptions that others must adhere to.

Rockland’s own County Code contemplates drone use and restrictions but includes several exemptions. Included in the exempted activity is where a law enforcement agency uses the drone, so long as the use is in accordance with accepted Fourth Amendment jurisprudence with regard to search and seizure. Essentially, if a police officer uses a drone in a way that violates your right to privacy per the Fourth Amendment, then your legal defense will be a constitutional one rather than a bright line letter of the law argument.

Simply because a clear-cut rule does not exist currently, does not mean there won’t soon be one. Senate Bill S411 seeks to limit the way a law enforcement officer can use a drone, specifically in the collection of evidence, take audio and video recordings or otherwise use a drone for surveillance. If you are facing criminal charges stemming from police drone use, it will be vitally important that you seek legal counsel immediately.

Phillip J. Murphy, Attorney at Law, has over 25 years of criminal defense experience in Rockland County and the surrounding areas. An integral part of a competent defense is an up to date understanding of all new laws affecting your rights. Where technology meets criminal prosecution, you can be sure that the laws are in constant fluctuation as new issues arise with every new technological advance. If you’ve been subject to an invasion of privacy by authorities, either drone-related or by some other means, call today for a free consultation.