When Can A Lawyer Go To Jail? 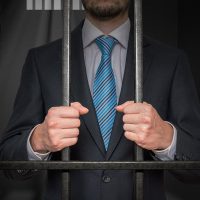 Even though lawyers play an important role in our legal system, they are more than capable of being held accountable for various crimes. If they commit offenses, they are treated just like any other member of society. After all, our legal system clearly operates under the principle of blind justice – the idea that everyone is equal in the eyes of the law. With all that said, there are some crimes that a lawyer might be especially likely to commit:

Immigration lawyers often commit visa fraud. This was the case on November 18th of 2022, when the Department of Justice reported that two lawyers in New Jersey had been indicted for making false statements under the penalty of perjury. They had made these statements while preparing visa applications for their clients. These lawyers were apparently encouraging their clients to apply for asylum even though they knew that these clients were not legitimate asylum seekers.

Yes – it is possible to be imprisoned for contempt of court. That being said, it is exceedingly rare. Contempt of court occurs when someone – perhaps a lawyer – acts in a disrespectful manner during court proceedings, impeding or preventing judges from carrying out their duties. It is much more likely for a lawyer to receive a stern warning rather than actually being put in a jail cell.

Some lawyers assist their criminal clients in their money laundering operations. If the lawyer assists in this manner, they will likely be considered an accomplice. They will then face money laundering charges and a considerable prison sentence.

Lawyers may also be prone to bribery. For example, a lawyer might try to bribe a jury to come to a certain decision. They might even try to bribe a judge or a witness who is about to testify. This is a serious offense and will likely result in incarceration.

A lawyer can obstruct justice in a number of ways. First, they can voluntarily leave a case open and refuse to proceed. They might also conceal evidence or prevent certain people from testifying.

Perhaps the most obvious example of a lawyer who committed multiple crimes is Paul Bergrin. This New Jersey criminal defense attorney eventually pleaded guilty to running a prostitution ring in New York City. He was then arrested for conspiring to murder an informant. Later, he faced additional offenses for RICO racketeering, bribery, mortgage fraud, murder of a witness, cocaine possession, and others. He was finally sentenced to life in prison in 2013.

If you’ve been searching for a qualified, experienced New Jersey criminal defense attorney, look no further than Phillip J. Murphy – Attorney at Law. Over the years, we have assisted numerous defendants in the Garden State. Whether you are a lawyer or simply an average citizen, you still have the right to an attorney. Book your consultation today, and you can immediately get started with an effective defense strategy.