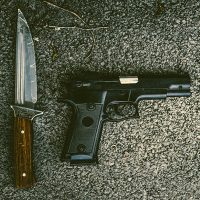 Threatening someone with a deadly weapon during a robbery will always lead to serious criminal consequences. But does the type of weapon actually matter? What is the difference between a knifepoint robbery and a gunpoint robbery in the eyes of the law? Are they both considered equally dangerous? Or will one weapon lead to more serious consequences than the other? The answer might surprise you.

The Definition of a Deadly Weapon in New Jersey

Under Section 2C:11-1, virtually anything could be classified as a deadly weapon as long as it has the capability to produce “death or serious injury.” This might include knives and guns – but also blunt objects such as hammers, shovels, small statues, or even a telephone. It’s important to understand that this definition is kept intentionally vague to prevent people from “getting creative” with their weapon use in order to avoid criminal consequences. This also means that both guns and knives are seen as equally dangerous in the eyes of the law.

Armed robbery laws in New Jersey make it clear that the criminal consequences for robbery become much worse if you use a deadly weapon to threaten victims. First-degree armed robbery can result in a sentence of up to 25 years in prison. Again, the definition of “deadly weapon” is kept intentionally vague – probably to account for any future developments in weapon technology. While criminals today might favor firearms, a new deadly weapon may be developed within the next few decades. It’s also worth pointing out that armed robbery laws in New Jersey make no distinction between knives and guns. In some cases, even the use of fake guns and knives can result in armed robbery charges.

Let’s examine two recent examples of robberies that involve knives and guns. On October 25th of 2022, the Department of Justice reported that a Newark Man had been sentenced to 115 months in prison for the knifepoint robbery of a taxi company in Harrison. The incident took place in 2019 when the defendant entered a taxicab company with a knife and demanded money. He also made off with the dispatcher’s jewelry and cell phone.

115 months is almost 10 years in prison. But the fact that this defendant was carrying a knife is only part of the story. The career criminal – who is in his 40s – also has two prior robbery convictions on his record and additional felony convictions. His criminal record would have had an impact on his sentencing – perhaps more so than the specific type of weapon used in the robbery.

On November 2nd, a South Jersey man was sentenced to 3 to 5 years in prison for armed robbery, burglary, and possession of a sawn-off shotgun. He committed 5 separate armed robberies spanning from 2020 to 2022. One incident involved the defendant meeting with a victim to purchase a gaming computer. During the meeting, the defendant brandished his sawn-off shotgun and made off with the computer without paying.

These two examples show that robberies at knifepoint do not always result in lighter sentences compared to gunpoint robberies.

Where Can I Find a Qualified, Experienced Criminal Defense Attorney in New Jersey?

New Jersey criminal lawyer Phillip J. Murphy stands ready to defend your rights and mitigate any potential criminal consequences you might be facing. At the end of the day, threatening someone with a deadly weapon is always going to lead to serious criminal consequences and many years in prison. But you’re not in this fight alone. With a qualified criminal defense attorney at your side, you can explore a range of effective defense strategies and strive for the best possible result. Book your consultation today to get started.