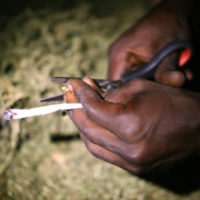 As we previously discussed, in January, Governor Cuomo ordered a study to be conducted on the recreational use of marijuana via the New York State Department of Health. That study has since been released, and has shocked a number of New Yorkers.

The arrest statistics alone are alarming: There have been close to 900,000 marijuana-related arrests in New York within the last 18 years, with an average of almost 50,000 arrests per year. This indicates that New York law enforcement is still targeting marijuana, in spite of legal reform spreading across other areas of the county. Most arrests involved low-level misdemeanor possession in urban centers, according to the report.

Racial Profiling Is a Serious Issue

Specifically, according to the state Division of Criminal Justice Services, tens of thousands of these arrests came after New York legalized medical marijuana four years ago, with most marijuana arrests happening in New York City, followed by Suffolk and Westchester Counties. Between 2000 and 2017, the next highest Counties for marijuana arrests included Nassau, Erie, Monroe, Albany, Orange, Onondaga, Rockland, and Niagara.

Perhaps most alarmingly, the arrest statistics reveal serious issues involving racial profiling, indicating that New York has not made as much progress towards reforming marijuana laws as it could. Specifically, although marijuana use is roughly equal amongst both blacks and whites, blacks are reportedly four times more likely to be arrested for marijuana possession. Another racial group that appears to be the target of New York City policing includes Latinos.

Still a Schedule I Drug Under State Law

Marijuana remains a Schedule I drug in New York, alongside cocaine and heroin. The highest number of arrests over marijuana occurred in 2000, which brought in over 67,000 marijuana-related arrests. Similar peaks occurred in 2007 and 2012 as stop-and-frisk searches reached record highs in New York. Since 2013, marijuana arrests have declined overall, falling from approximately 60,600 between 2008 and 2013, down to 34,130 arrests per year since 2013.

In addition to eliminating the racial bias so obviously present in New York’s marijuana arrests, criminal justice reform should also be encouraged via directing more drug users into addiction treatment, as well as creating poverty provisions so that fines do not bankrupt people. New York has already decriminalized ownership of less than 25 grams, issuing fine-based violations instead of criminal charges.

Clearly, New York law enforcement still cracks down hard on possession of marijuana, particularly if you fit a particular racial profile. If you have been unfairly targeted and charged with a drug crime like this, contact experienced criminal defense attorney Phillip J. Murphy today. Our legal team has been serving clients throughout New York for more than 25 years in Rockland County and surrounding areas.