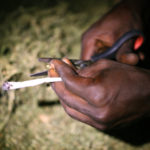 What’s Ahead for The Decriminalization of Marijuana?

When it comes to the legalization and regulation of marijuana, it is important to keep in mind that there is a difference between federal authority to manage recreational vs. medical marijuana insofar as what authority the Justice Department has to enforce federal laws banning the product (i.e. arresting and prosecuting citizens for drug possession)…. Read More »

Nationally, there has been much debate over the legalization of marijuana for medical and recreational use. In 2014, the State of New York became one of the 22 states allowing access to marijuana for medical purposes. In addition, the New York Police Department changed its protocol regarding treatment of individuals who possessed small amounts… Read More »

Criminal Possession of Marijuana: The Possible Penalties Upon Conviction