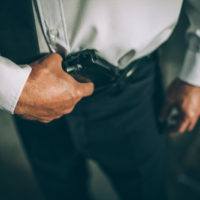 New York’s weapons laws are on trial at the U.S. Supreme Court this month, which, on December 2, heard arguments over its previous rules barring anyone from being able to bring a gun to a shooting range or second home outside of the city. While the city already amended these rules and asked that the Court drop the case, if the Court does render a decision on New York’s previous law, this could dictate New York, New Jersey, and every other state’s ability to implement restrictions when it comes to guns, especially possession outside of one’s residence.

Still, why the Court is hearing the case even though New York retracted its latest restrictions is a mystery, as there has to be a live case or controversy, and many would argue that this one is now moot. However, others argue that the city could always restart its “unconstitutional conduct” and that some have already suffered under the retracted rules; before they were retracted.

While the Court already established that an individual has the right to own guns in District of Columbia v. Heller, the case did not further define that right, which has led to a number of weapons restrictions at city and state levels. Specifically, the Court pointed out that Heller did not restrict the ability for the government to prohibit the possession of firearms by felons or the mentally ill, as well as prohibit carrying them in sensitive areas such as schools. Meanwhile, the lower courts have decided more than 1,000 Second Amendment cases, upholding a myriad of gun control laws, where Second Amendment challenges overwhelmingly failed in general. Specifically, as long as a government wasn’t prohibiting the ability to own a gun for self-defense in one’s home, the benefit of the doubt was given to however a city or state wants to define as illegal possession of a firearm and related restrictions.

It is no longer illegal in New York to take one’s guns outside of the city if you have a premises license, although there are those who argue that they could suffer negative consequences for what was considered to be illegal while the ordinance was in place. Still, guns and weapons charges are serious offenses in New York, and its laws are strict; for example, New York does not recognize other carry permits from other states, which means that if someone travels to New York with their gun, they could be facing charges and prison time.

If You Are Facing Charges In New York, Contact Our Criminal Defense Attorneys

If you have been charged with a weapons crime, contact our experienced New York criminal defense attorneys at the office of Phillip J. Murphy today to find out how we can help.